A Depravity in Four Acts 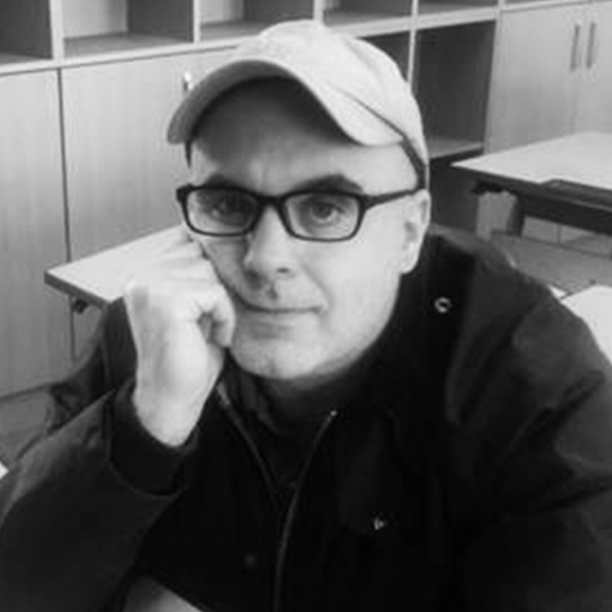 Act I: Prelude; a Coin for Charon

ITAEWON – Seoul is a beautiful city by almost any standard. It fits every imaginable definition of the ultra-modern city; tastefully designed skyscrapers, one of the world’s best and most efficient subway systems, ubiquitous and immense colorful LED screens like you see in Times Square, with hordes of bustling attractive and sharply dressed people.

Of course, this is the Seoul you see in the more affluent districts like Gangnam, a place where the handbags cost more than my car, watches exceed my yearly income, and cars more than my home. The Eloi of Korean society gather here to live, shop, and eat stuff that is expensive.

Seoul is one of the most expensive cities in the world for housing, comparable to San Francisco or New York, but there are humbler districts in Seoul. Still pricey mind you, but without the garish displays of wealth—subtract the live-in Filipina housekeepers, add in cars in the 5-figure range.

In these neighborhoods, mostly around the subway stations, one is more likely to encounter the homeless drunks asking for change. The indigent here are more pathetic than frightening, and wear shame and humility more heavily than most other places I’ve been—just poor wretches caught in the oldest trap of all. There is nothing dangerous here, nothing I can feel anyway, just a compacted mass of humanity doing the things people do in order to eat and live.

“…“American size” clothing (big and tall), and always on the sidewalk, aggressive salesmen waiting to accost you…”

Itaewon is the neighborhood in Seoul adjacent to what was once the largest American army base in Korea, Yongsan Garrison. (They have recently chosen to relocate most facilities further south, I presume out of range of conventional North Korean artillery.) I suppose if LA has Koreatown, and San Francisco Chinatown, this would be America Town.

Unlike other parts of Seoul, there’s no aesthetic here, no beauty. The buildings are dingy and gray, clouded in a pungency of stale beer, vomit and urine. Its character is foremost brazen drunkenness. Not the romantic Hemingway sort, no, just the ugliest sort, the kind that tears great bloody chunks from the haunch of one’s better angels.

Unlike any other part of Seoul, the wallet moves to the front pocket and handbags are clenched tightly. The air of invulnerability and personal security so prevalent in every other part of this country vanishes; there is a palpable and most likely correct sense that thieves and perpetrators have you marked if not made.

May 2018: Unidentified man setting up Spiderman in front of a storefront in Itaewon 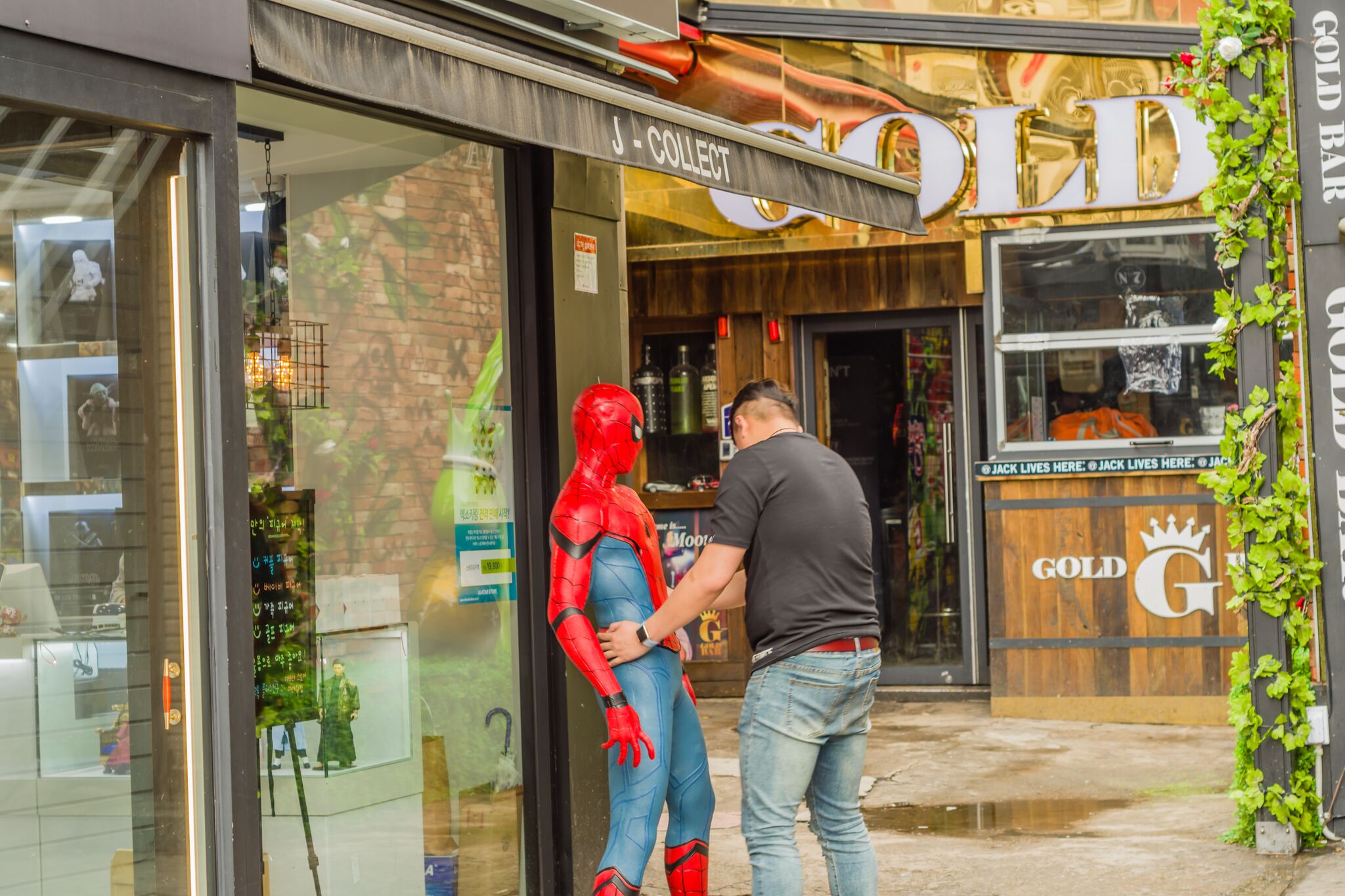 The strip is about a mile long, quite hilly, and stocked with all the trappings necessary to separate an individual from their earnings. Most of the standard American fast food joints stacked alongside overpriced and mediocre restaurants serving Western fare like chicken wings, pizza or burgers, bars about every other door, tobacco shops with Cuban cigars, “American size” clothing (big and tall), and always on the sidewalk, aggressive salesmen waiting to accost you, pull you into their store for a tailored suit.

The side streets become increasingly salacious and adult-themed the further you venture from the main strip. There are the two sloping side streets, nicknamed “Hooker Hill” and “Homo Hill.” They’re a bit on the nose, as far as names go, and are home to the obvious. 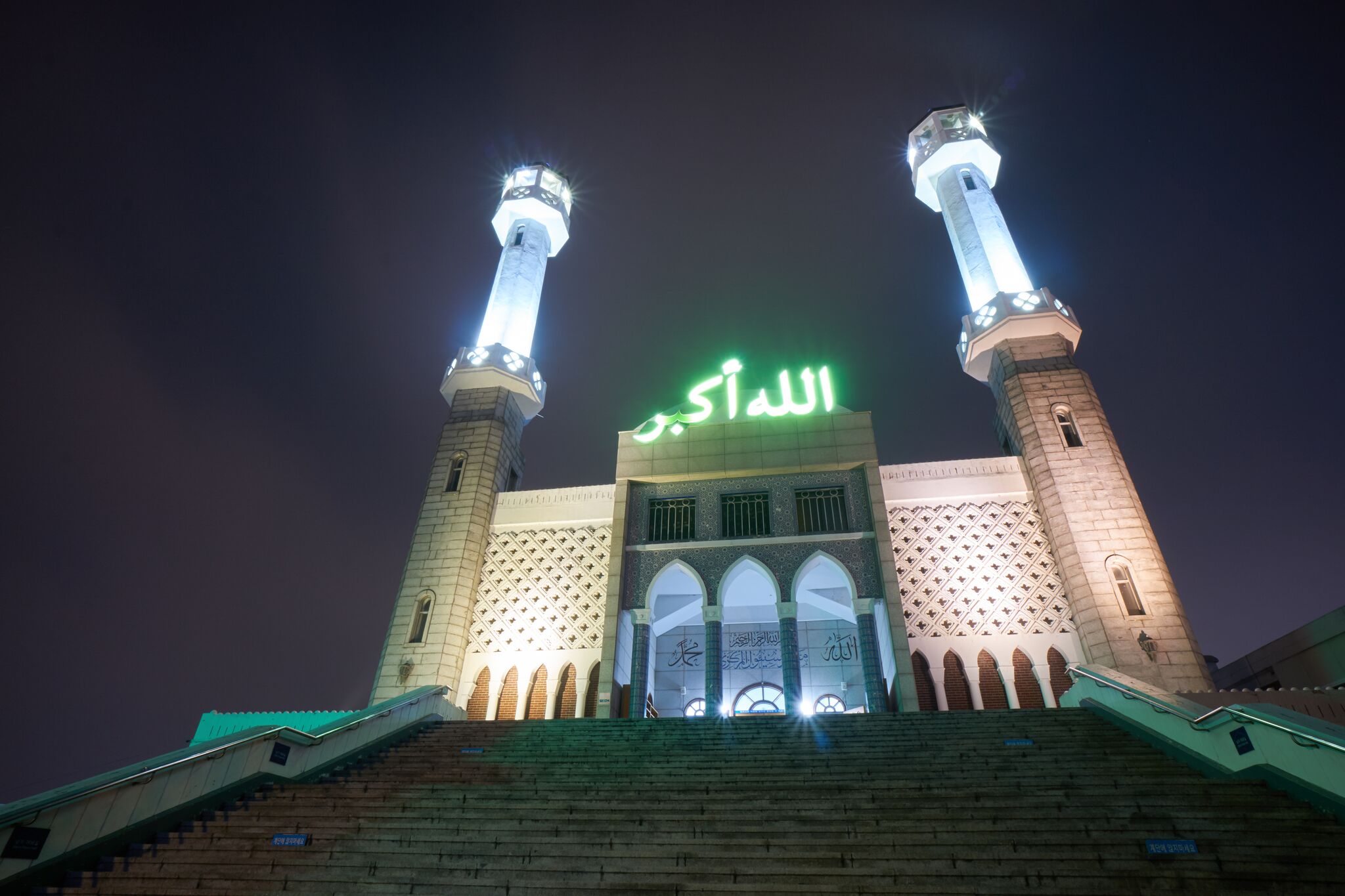 The sidewalks are normally packed with wandering foreigners. Traversing the sidewalks can be tedious business with only a narrow walkway between the storefronts and street vendors. The passing crowd is seasoned with aggressive and uninhibited drunks just waiting for some slight. Bumping shoulders or stepping on a shoe often leads to an awkward attempt to fight in what I can only guess is a form of ersatz human intimacy, something to fill the void of loneliness.

Although I have never even seen illegal drugs in Korea, I would think this would be the place to look if one were bold enough to defy this country’s rather severe drug policy.

There was also a brutal murder in a Burger King bathroom some time ago on the main street. Murder isn’t really a thing here, and they even made a movie out of it.

Most of Korea’s Islamic population is also centered here, as is the country’s sole mosque. There is also a sizeable concentration of African and Turkish migrants. It is near the embassy district of Seoul, so restaurants catering to nearly every cuisine and ethnicity are all about. It’s an oddity I’ve often thought about that the center of cultural and culinary diversity is also the city’s festering crotch-sore.

“…there’s just something here so uniquely off, so specifically depraved, so infested with wretched darkness that it feels impervious to the sun.”

As for my own history here, well, if science fiction were fact, I’d have this whole infernal domain wiped from my mind, the memories washed away like chalk in the rain. Few emerge from here unashamed. The beleaguered and defeated trudge down the subway steps at dawn, a Morlock’s descent.

Blake claimed in The Marriage of Heaven and Hell that “The road of excess leads to the palace of wisdom”, but I strain to think of any wisdom Itaewon might ever have imparted upon anyone, aside from the good sense to avoid it altogether.

These places exist around the world, these “Pleasure Island” communities near current or former army installations: Bangkok, Tijuana, Saigon, Manila, Okinawa to name just a few, all with a parallel motif of booze, hookers and cheap souvenirs. I’ve been to many, but there’s just something here so uniquely off, so specifically depraved, so infested with wretched darkness that it feels impervious to the sun. 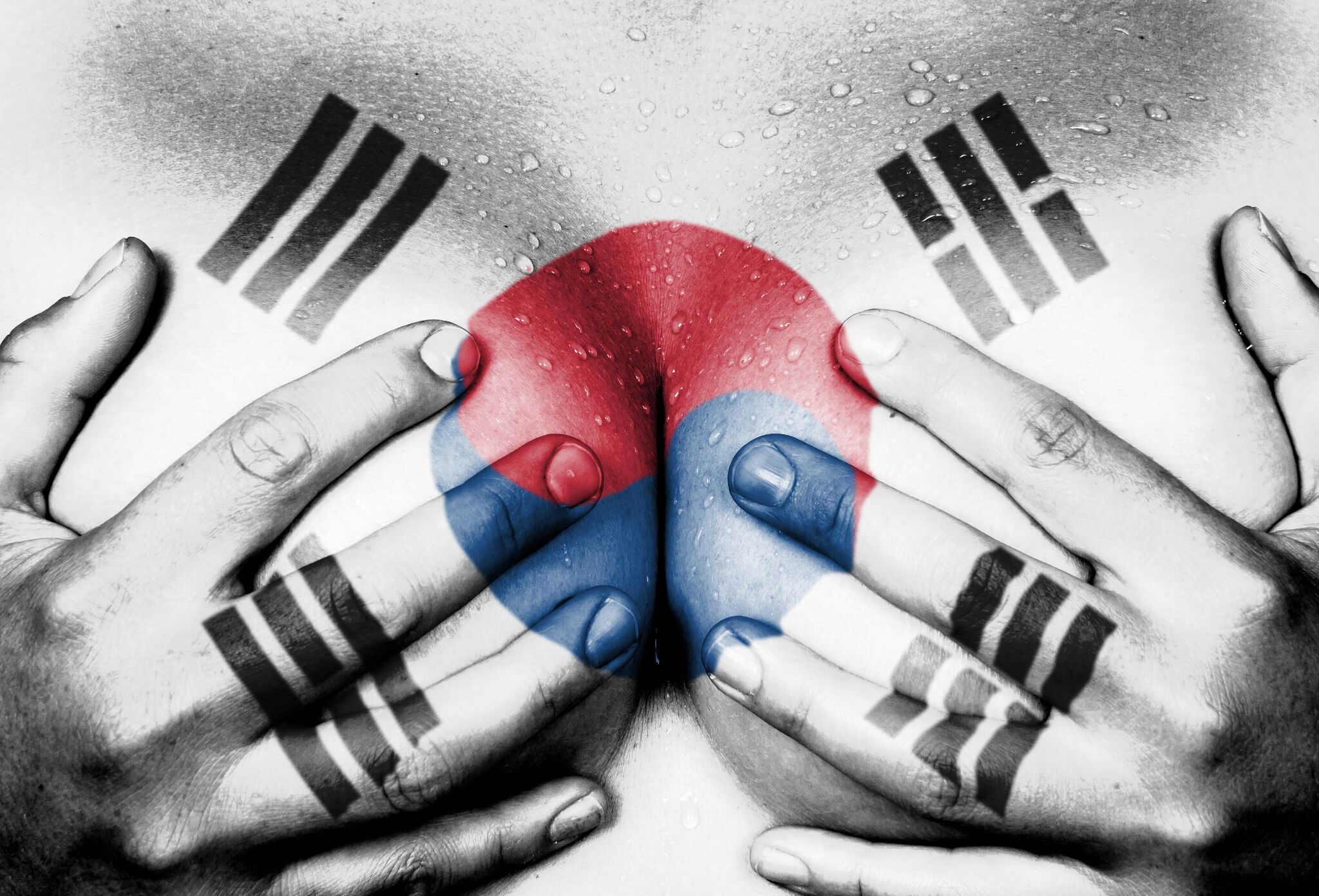 It is therefore a curious thing I have decided to make an overnight trip here, to immerse myself in all this for the sake of examining America’s presence and influence on foreign soil, to perhaps objectify my condemnation of it, and, perhaps, to stand vulnerable to further debasement and assault upon my person.

It is on a Friday evening I board a subway near my home in Incheon about 30 miles outside of Seoul. It’s cold, almost freezing. I can tell it’s freezing when my gold tooth starts to ache a little from the cold air. The doors close and the long train drifts across a dark landscape and over the Han River.

My journey has thus begun. Let the battle be fought. It seems a decent night for it.

This site uses Akismet to reduce spam. Learn how your comment data is processed.

Pornography, The Conversation, Part IV: Why Do We Need or Want Pornography?
Share This